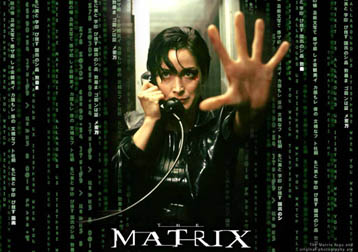 Neo (Keanu Reeves) is a software programmer at day and a computer hacker at night. But more than this duality, it is the dual nature of life itself that intrigues him. And then one day, after a strange sequence of events he meets Trinity (Carrie-Ann Moss). Strong, smart, and suave, Trinity promises to end Neo’s quest for the answers he so dearly seeks and takes him to meet Morpheus (Laurence Fishburne).

With Morpheus’s help Neo realizes that the entire human race is living a life created and controlled by machines inside a virtual world called The Matrix. Morpheus frees Neo from the Matrix and introduces him to the ‘real world’. Neo joins Morpheus in the war against the machines. Morpheus shows Neo the path to his journey but it is Neo who must walk the path because as per the Oracle’s prediction Neo is ‘The One’ who will free mankind from the bondage of the machines.

Soon a combat ensues between Neo and the Agents (machines) in which, despite being almost dead, Neo rises like the Phoenix and emerges victorious against the Agents. Neo is enlightened and realizes the ultimate truth that he is ‘The One’. And thus starts a new journey for Neo. A journey wherein Neo dreams of a new world without boundaries, free from control by a false ‘system’, free from the clutches of The Matrix.

Liberally laced with deep-rooted philosophy, The Matrix is more than just another run of the mill sci-fi action flick. The Matrix is a revelation. A revelation that the entire human race is bonded to a system so strong that most do not even realize this fact and those who do, have no escape as they are so used to the system. For the rest of us, there is always the hope of one day being ‘free’.