A Not So Suitable ‘Suitable Boy’

Vikram Seth’s magnum opus novel, A Suitable Boy, opens with a dedication in verse, followed briskly by the contents page, again in a rhyming couplet for each chapter.

No such luck with the mini-series of the same novel. It opens with a lame placard:

When India became independent in 1947, it was partitioned into two countries.
India was free, but the land and the people were divided forever.

I understand this production is primarily for a Western audience but do we have to spell out everything to the audience?

And this audience disconnect, dear friends, is the biggest drawback of this Mira Nair directed mostly colorful, sometimes brilliant, but always inconsistent mini-series.

Although set somewhere between Banares and Patna, in the fictional town of Brahmpur in the post-partitioned India of 1951, with roles enacted largely by Indian/Hindi actors, the characters predominantly speak English like it is their mother tongue. The only saving grace is the occasional sprinkle of token Hindi, Urdu, or Hindustani. There is a huge discord between the un-relatable English they speak and the Indian mannerisms they carry. You could have set this in Britain and the dialogues would need no change. Sample this:

Or this one, where pun is perhaps intended:

“We are witnessing the erection of the Raja’s lingam”

This makes the dialogues very clunky and superficial for an Indian backdrop.

One argument is that the dialogues, written by Andrew Davies (of Pride and Prejudice fame), try to stay consistent with the language of the novel. Agreed. But the novel is a different beast. It is written in English and has a lyrical, literary quality to it where the backdrop (although Indian) is also described in English. It is a perfect example of the Great Indian-English Novel. The language in this mini-series, on the other hand, is a mishmash of discordant notes.

Although Hindi is available as an audio language on Netflix, the dubbing seems almost like a hurriedly put together after-thought. Despite its flaws, this reviewer recommends that you stick to English. Here’s why.

If you haven’t read the novel, you might initially find yourself feeling uneasy trying to settle into the tone, and texture of A Suitable Boy. But one episode later, you’ll get used to the English diction and comfortably fit-in. If, on the other hand, you have read the novel, then the dialogues will sound familiar and the sheer joy of reliving everything you read way back in 1993 will keep you asking for more as this mini-series goes into great pains in executing an almost page-to-page translation of the entire novel, barring, of course, the detailed descriptions by Seth.

The set designs, the characters, the quirks, the traditions, the post-independent political issues, the religious conflict, every detail is vividly displayed, richly layered, and beautifully complimented by Alex Heffes’ and Anoushka Shankar’s music. 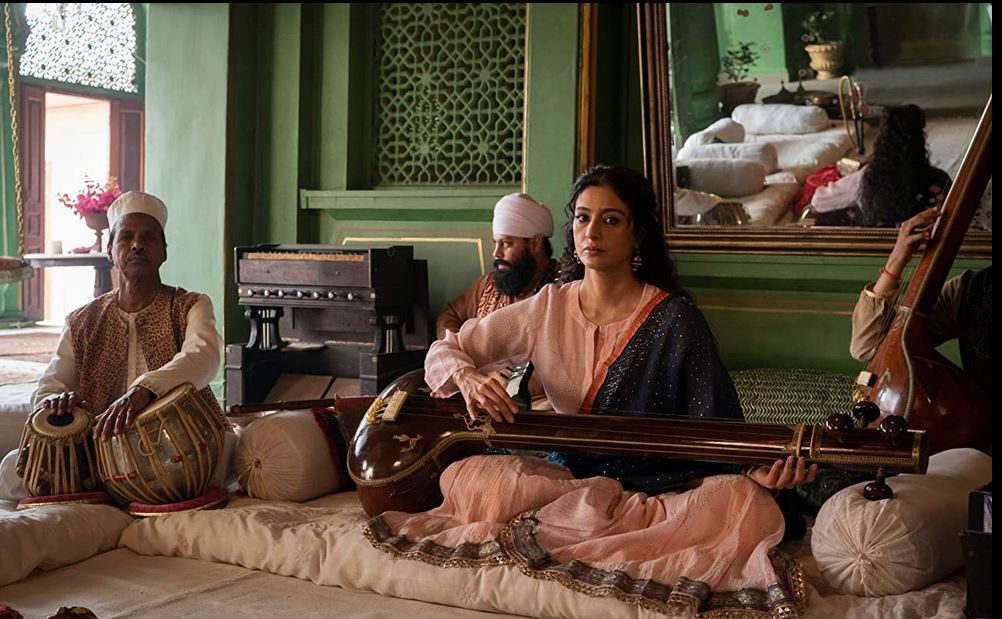 Tabu’s Saeeda Bai is perhaps the only character that seamlessly fits into the milieu; her beautiful Ghazal renditions, Urdu speech, and courtesan mannerisms make her a perfect fit for the role. As Urdu is Saeeda’s mother tongue, her English diction is clearly intended to sound like her second language, which adds authenticity to her character. Wish the makers had done the same for all the characters.

When Maan Kapoor (Ishaan Khatter) is forced to spend time in the countryside, it almost turns out to be a blessing in disguise for him, offering huge potential to develop into a beautiful character arc. But that joy is short-lived when Maan returns to Brahmpur, only to go back to his former ways that leads to the stereotypical Bollywood trope in the end.

Cast perfectly as Lata, the wide-eyed, confused, and torn between her heart and her mom’s coercions, Tanya Maniktala is the find of the year. Of the lot, a very interesting character is Haresh (one of Lata’s suitors) played by Namit Das who, although initially comes across as caricature-ish, soon evolves into a mature human, a man with integrity, commitment, and a kind heart (all rolled into one).

Overall, it would be interesting to see where the characters of Lata, Haresh, and Maan go from here. No, there’s no season 2 lined up, but Vikram Seth fans can take heart from the fact that there’s a sequel—A Suitable Girl—in the works, and perhaps even a surprise novella—A Bridge of Leaves.

As a reader of good literature, my expectation is that these forthcoming books (and maybe another mini-series) will be even more interesting in describing the journey of the prime characters, than the mini-series.

If you can get past the language hurdle, definitely worth a watch on Netflix.