If your grouse with Tamasha is that “…it’s the same damn story”, then just give the poster a second glance that clearly states:

Why Always the Same Story?

If that disclaimer doesn’t satisfy you, there’s a moment in the film, when the storyteller, the fakir like austere Piyush Mishra, proclaims in his baritone voice to the wimpish child (a young Ranbir Kapoor), that will:

…call them by any name—Ibrahim or Abraham, Moses or Musa, Jesus or Isa Masih, Samyukta or Sanyukta, Heer or Juliet—aren’t they all the same characters and the same stories?

And that, dear reader, is what Tamasha is all about: a celebration of every story, fairytale, mythology, folklore or fable you’ve ever known; a celebration of storytelling itself and by that extension a celebration of cinema. For, no matter how old or new the story, its core is essentially the same. The uniqueness is not in the story itself but in the telling.

Writers, filmmakers, historians, painters, and musicians, everyone is jumping on to the mythology/folklore bandwagon. Director Imtiaz Ali too taps into this zeitgeist to essentially give us the same Heer-Ranjha saga from his perspective.

Ali revisits his favorite tropes of meeting, separation, realization, and reunion and yet, consciously or otherwise, he is at his mythical best, depicting the various stages of the hero’s journey or the Monomyth:

While Ali might or might not have consciously chosen the Monomyth template, the universal nature of the Monomyth reflects in Tamasha too, self-validating the point that every story is essentially the same.

Tamasha is probably also Imtiaz Ali’s first foray into meta narratives or the metamovie for Tamasha is a story about stories, storytelling, storytellers, and the story-within-the-story. Reason why Tamasha so often treads into the domain of the Absurd. While this hint of Absurdity is not new in Ali’s movies, it sure reaches its zenith in Tamasha, thanks to a liberated performance by Ranbir Kapoor as the lost-and-found soul Ved who needs his soul mate Tara (Deepika Padukone) to show him the mirror to his real inner self. It is in these Absurd moments that Ved goes haywire doing things “normal” people would not. Check out Ved’s tomfoolery while making a corporate presentation or the scene when he’s fired from his job where the Absurdity borders on the bipolar reminding one of Vikram’s character in Anniyan. Another prominent symbolism of Absurdity in the movie, to my eye, is probably the appearance of Joseph Heller’s Absurdist fiction book Catch-22, which plays an important role in taking the narrative forward.

Yet, Tamasha falls short of being Imtiaz Ali’s masterpiece. The didactic tone when Ved feels the need to spell out the story-within-the-story to his Dad and in turn to the audience, or literally to the audience itself in the beginning/climax is superfluous. The jumpy editing lazily employs placards to depict passage of time rather than segue it into the narrative with some action, not to mention the redundant flashbacks that slacken the narrative further. Rahman’s music, although passable and occasionally hummable, sounds like a hangover of Rockstar and is nowhere near the maestro’s best. 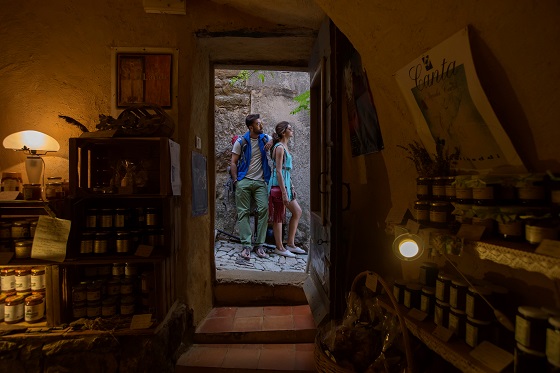 Don’t go into Tamasha expecting a straightforward happy-go-lucky flick like Jab We Met because with each movie Imtiaz Ali’s oeuvre is expanding to include complex characters and narratives even though his core philosophies and stories remain the same. Which is not necessarily a bad thing. As French auteur Jean-Luc Godard once said, “It’s not where you take things from – it’s where you take things to.” Tamasha takes you to that familiar, beautiful place in your heart that you like to visit again, and again, and again…