The Invitation I Wish I Had Declined

One of the characters in The Invitation says to the other:

“Until you stop making a joke out of everything, you’ll never learn a thing and nobody will care about what you think”

The Invitation could have done with its own advice and not succumbed to being pretentious. What were the writers even thinking while writing The Invitation?

“Let’s create some two-dimensional, single-note, stock characters; give the main leads an emotional past to brood over; shove in some cult mumbo-jumbo, and finally kill em’ all. Voila! We have a winner on our hands. A film that explores multiple genres: mystery, thriller, cult, horror, psychological-drama, and, above all, apocalypse, all in the same breath. Phew! Hi-5 to that.”

Unfortunately The Invitation does justice to none of those genres or themes. Barring the main leads, none of the diverse, multicultural characters are fully fleshed. Even those main leads are given only an iota of vague characterization with unclear motives. Agreed this is a slow-simmer and the motives will get clearer towards the end but the end is no surprise either. It’s just a single-note film with single-expression characters that starts from point A to predictably end at point B.

In a party of roughly 10 people not one has the guts or wits to understand what’s going on? Everyone seems like they walked out of their respective sitcoms, trying to look dapper and spout sexy punchlines. Under the guise of a reunion, everyone was perhaps there for one and only one thing: get laid. Sorry, except, of course, for our omniscient protagonist who, sporting a serious wooden expression throughout, could see the end from a mile away. The rest, like I said, were dimwits with little or no respect for basic common sense or intelligence. 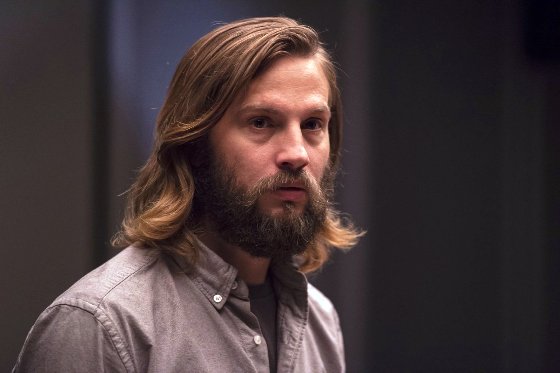 Why So Serious? Director Said So Dumbo.

How does one root for characters like these? Or a half-baked plot that wants to be too many things at the same time? A simple suspense movie masquerading as a profound treatise on the human psyche and apocalyptic cult happenings? Scream unsuccessfully masquerading as Psycho + Eyes Wide Shut + Children of Men if you will.

The emotional core (or the lack of it) fails to resonate with you. Just when you are expecting a revelation about the past lives of the main leads or a subtle, dark twist in the denouement, all you are served is clichéd tropes of the whodunit genre. I’ll give it to the director though for the opening scene and the parting note—two thought provoking bookends to an otherwise anything but interesting film.