Numerous nights have I spent gazing the skies, sliding my fingers across the stars to trace the borders of my favorite constellation, “Hey! there’s the Big Dipper, or is that Scorpion? Look, how Polaris lights up the sky in Ursa Minor”, I would quip to my friend. In that stillness of the night, time too would stand still and instead of feeling insignificant, the vastness of those starry skies made me transcend time and space.

I experienced a more material expression of that feeling on numerous other occasions while watching the works of great masters like 2001: A Space Odyssey, Solyaris, Gravity and now Christopher Nolan’s Interstellar.

Into the Event Horizon

A sucker for science fiction, yours truly was already sold on Interstellar much before watching it. However, what took me by surprise wasn’t the plot, Matt Damon’s special intergalactic appearance, or the climax but the manner in which Nolan deconstructs the film for us, slowly but surely explaining each scientific strand, theory and logic to his audience—what’s a wormhole; what happens if you cross the event horizon; how does one traverse a black hole?

Where other films let the audience assume much of the “science” behind the science fiction, Nolan collaborates with famous theoretical physicist Kip Thorne to lay the scientific foundations of his script. The latter is also the film’s executive producer and apparently kept tabs to ensure the script is scientifically sound.

Despite this being Nolan’s most ambitious project, it’s also his most accessible. Somehow, this is exactly why some people love Interstellar while others simply abhor it.

What happens after Cooper embarks on his interstellar mission with Amelia (Anne Hathaway) and others is what makes Interstellar interesting and, let me confess, an eclectic mix of abstractness, absurdity, science and spirituality. Especially the climax and anti-climax, no matter how believably based on sound scientific theories, is just that: a theory. Marketing the flick as something largely based on factual science can miff science purists and enthusiasts alike. Why walk down that path when a pure abstract ending (think Kubrick’s 2001: A Space Odyssey) would serve the purpose better by showing less and letting the audience fill in the gaps. 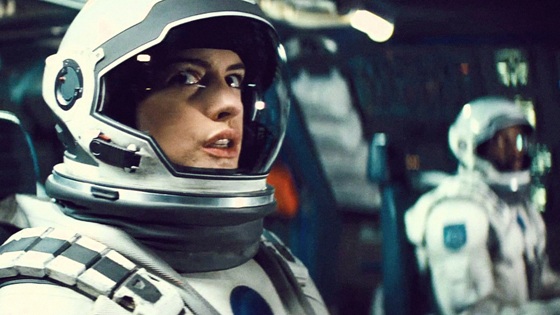 Now You See Me

In the end, it’s the director’s call and this so-called dumbing down does not take away from the sheer experience and pleasure of watching how the human race might someday transcend barriers of the mind, of time and of space for some interstellar travel.

Like Dylan Thomas’ poem quoted in the flick, Cooper’s journey reminded me of these lines from Robert Frost’s poem that gives me hope of better days, of darker, beautiful star gazing nights, and plenty of opportunities to walk the miles and make dreams come true: